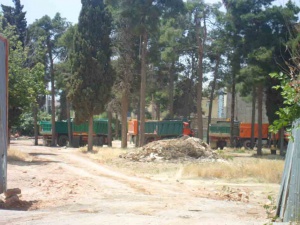 Britain has expressed serious concerns about the ongoing destruction of a historic cemetery in southern Iran, where members of the country's most persecuted religious minority are buried.

Iran's elite revolutionary guards have begun demolishing the Bahá'í cemetery in Shiraz, in the southern province of Fars, which is seen as an attempt to delete a dark episode from the history of mistreating Bahá'ís in the Islamic republic.

The Bahá'í faith, which accepts all religions as having valid origins, was founded in Iran in the 19th century by its prophet, Bahá'u'lláh. There are about 300,000 Bahá'ís believed to be living in Iran, and about 6 million worldwide.

At least 219 Bahá'í in Iran were executed because of their religious allegiance after the 1979 Islamic revolution, and some are believed to have been buried in Shiraz. Many were put to death because they refused to recant their faith. Nearly 200 square metres have been excavated and 50 lorries lined up to remove material, but it was not clear on Thursday whether Iranian forces had reached the point of unearthing tombs. In Persian, Bahá'ís refer to the cemetery as Golestan-e-Javid (eternal garden).

Britain's Foreign Office urged the Iranian authorities this week to stop the destruction and release seven leaders of the Bahá'í faith who have been imprisoned in Iran for the past six years, each serving a 20-year prison sentence.

The Foreign Office's minister for the Middle East, Hugh Robertson, said: "Six years ago today, seven leaders of the Bahá'í faith in Iran were imprisoned for 20 years each for practising their religion. I call on the Iranian authorities to release them as a matter of urgency. I was also deeply concerned to learn of the recent reports of the desecration of a Bahá'í cemetery in Shiraz, where approximately 950 Bahá'ís are buried."

He added: "We urge the Islamic Republic of Iran to abide by its international commitments to ensure all Iranians are free to practise their religion without fear of persecution."

Iran, which has Islam as its official religion, only recognises Christians, Jews and Zoroastrians as accepted religious minorities. It stepped up the persecution of its Bahá'í community following the 1979 Islamic revolution, accusing many of its members of having links with or spying for Israel, mainly because the Bahá'í governing body is based in Haifa. Iran has banned Bahá'ís since 1981 and deprived its members of many fundamental rights, including access to higher education and the right to own businesses.

Many Bahá'ís have been expelled from universities in Iran in recent years, including Paniz Fazl-Ali, who was banned from continuing her undergraduate degree last year. At least one Bahá'í couple are in prison solely for providing education to other members of the Bahá'í community.

A number of Bahá'í students who are denied higher education met Mohammad Nourizad,a prominent journalist and film-maker, earlier this month.

This week, a number of activists, including the celebrated lawyer, Nasrin Sotoudeh, marked the anniversary of six years' imprisonment in Iran of seven Bahá'í leaders.After assuming power as Iran's president, Hassan Rouhani appointed Ali Younesi, a former intelligence minister, to serve as his special assistant in minorities' affairs, in a move hailed by human rights activists, but there is no sign he is recognising Bahá'ís.

The systematic persecution of Bahá'ís in Iran has been led by the country's hardliners, especially the revolutionary guards, rather than the government. In a conciliatory move to Iran's Jewish community, Younesi visited a synagogue in Shiraz recently. It is not clear if the cemetery's excavation was a warning signal from the guards to the government about a softeneing in its stance towards minorities.

Iran's judiciary chief, Ayatollah Sadeq Larijani, denied in April that Bahá'í citizens were imprisoned on the basis of their religious faith.